Avoid comparing a Boolean value to true or false

The above would be more succinctly stated as:

In a similar vein, avoid assigning Boolean values by means of a ternary operator:

Instead, this can be expressed more succinctly, like so:

Note that when doing this, the operator precedence means that score >= 50 does not need to be surrounded by parentheses, however, doing so makes the code easier to understand at first glance.

Testing for null and undefined

Quite often you will find yourself testing whether a variable has been set. In Javascript, this means that you want to check if it has been set to either null or undefined.

A simple way of testing whether a variable is null or undefined could be simply:

The first statement is OK, because null is immutable. However, one of Javascript’s quirks is that undefined is, for some reason, mutable. This means that someone could assign a value to undefined, even a “truthy” one, thus impacting any other comparisons.

In the example above, if the value of myVar was 2, isUndefined will be equal to true, which is confusing, to say the least.

The correct way to test if a variable is undefined, is to use the typeof operator:

However, often times, you do not really care if any variable is exactly undefined or null, and you want to do the same thing in either case.

Both of these values are special values which are considered “falsey”, meaning that they are loosely equal to false (more on strict and loose equality below).

Thus, a simplified test can be done instead:

Note that isFalsey will be true when myVar is one of the following:

This is because the former (double equals) attempts to do type coercion before comparison, whereas the latter (triple equals) simply compares as-is.

For example, and empty string and 0 are not strictly equal, but they are indeed loosely equal. Javascript is full of little surprises like that - making the equality comparison which occurs with a type coercion is notoriously difficult to comprehend so it is best to avoid it! 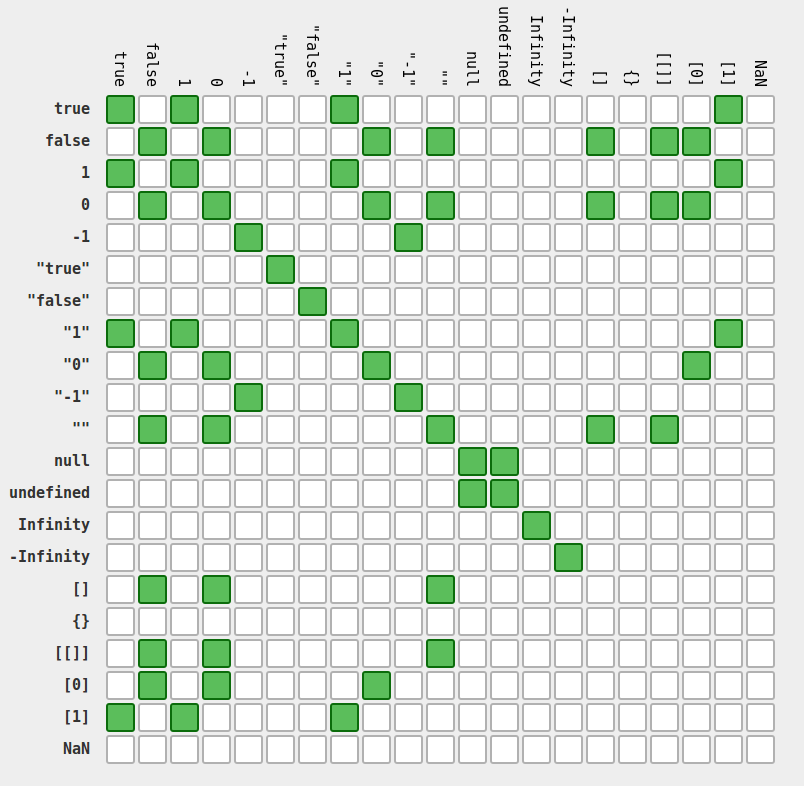 If you cannot memorise this chart easily, you are probably much better off using the triple equals form.